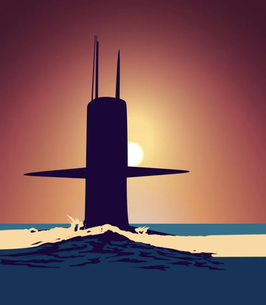 Douglass Randolph Baker, 78, of Middletown, entered into eternal rest on Sunday, October 9, 2022, at the M.S. Hershey Medical Center.
He was born on November 8, 1943, in Jamestown, NY and was the son of the late Carl E. and Florence D. (Turney) Baker Lawson.
Douglass proudly served in the submarine service during the Vietnam War and Cold War era. As a soldier of the Cold War, Doug served on several boats over the course of his 20 year career with the Navy and retired honorably in 1980. In his career he achieved multiple honors and awards, including Battle “E” award, Commanding Officer’s Commendation USS Runner SS-476, Commanding Officer’s Commendation USS Lafayette SSB(N), Submarine Squadron Sixteen Commendation, and Navy Achievement Medal.
Following his military service Doug worked at Three Mile Island as a Radiological Instrument Technician where he retired after 19 years.
Education was very important to Doug and he was proud to have graduated with honors in 1994 from Penn State University. Doug earned a Bachelor of Science in Finance and was a member of the Phi Theta Kappa fraternity.
Doug was active in the Sub Vets (Submarine Veterans) organization and was a volunteer with the Boy Scouts of America for over thirty years.During this time, Doug served in many positions with Troop 97 and at the district level. Doug was recognized with the BSA District award for service in 2000.
In addition to his parents, Douglass is preceded in death by his wife, Linda (Kremp) Baker and a brother, John E. Baker.
He is survived by his loving children; Dana Marie Jansen and her husband Peter, Chelle Ann Pronko and her husband Eric, Ken E. Baker and his wife Gina, and Scott P. Baker and his wife Kathy; six grandchildren, Katherine-Anne Jansen, Thomas N. Jansen, Kelsey E. Baker, Christopher Douglass Baker, Kaia J. Pronko, and Violet G. Pronko; a brother James C. Baker.
A tribute to his life will be held on Wednesday, October 12, 2022 at 8:00 PM at the Matinchek Funeral Home and Cremation Services Inc., Middletown. Viewing will be from 6:00 PM until the time of services, Wednesday at the funeral home.
Condolences may be sent online at www.matinchekfuneralhome.com