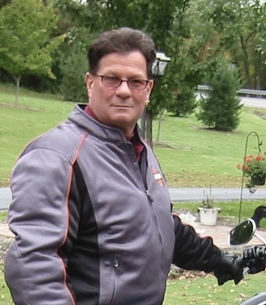 George Steele Benscoter, 69, of Middletown, entered into eternal rest on Monday, November 14, 2022 at the UPMC Community General Osteopathic Hospital after a short illness and a long, courageous battle with cancer. Born on May 9, 1953, in Meshoppen, PA, George was the son of the late James and Dorothy (Steele) Benscoter. He graduated from Northampton High School and Bethlehem Area Vocational-Technical School. He was the recipient of the James F. Lincoln Welding Award in 1970. Immediately after graduation, he began working as a Union Boilermaker, most recently with Local 13. He retired from Local 13 in 2010 and he began working outside the boilermaker trade at Three Mile Island, a place he knew well having worked there during its construction, the clean up, and many times throughout his life. George was a member of the Chapman Lodge #637, the Harley Owner’s Group, Hummelstown Field and Stream and SPOHNC Head/Neck Cancer Support Group in Hershey. Always the avid outdoorsman, and ever effective at the skills he learned as a Boy scout in his youth, he enjoyed archery and rifle hunting and really just reveling in the delight of ‘his’ woods. George was a passionate motorcycle rider throughout his life and he took particular joy in riding his Harley Davidsons and his fat tire bicycles. In collaboration with a metal artist, he fabricated steel art work that appeared in a number of the Harrisburg Symphony Designer Showcase homes. George was ever the tinkerer, the fixer of all things and above all else the consummate welder. His idea of a perfect day probably always would have included trail cams, something with a motor and wheels, a beat up pair of bibbed overalls, a radio cranked way up and cowboy boots but then again the cowboy boots were a given every day. In addition to his parents, George is preceded in death by his brothers Gordon and Arthur Benscoter and many precious pets particularly the Shelties Casey and Molly. He is survived by his loving wife of 24 years, Tina (Eshbach) Benscoter; a daughter Nicole Moore; a grandson Tyler Moore; a brother Lewis (Cathy) Benscoter, a sister in law Karen Benscoter; and three nephews, Erik, Jason and Kyle Benscoter plus the current Benscoter fur baby Kenzie. A special thanks is offered for the care given to George by AOP especially Dr. James Malone, Jody Burkhart and Cassondra Smith, Andrews and Patel Hematology/Oncology especially Dr. Mary Simmonds, Dr. Irina Veytsman, Dr. Brij Sood, Dr. Michael Bosak, Dr. Kevin Kelly, Dr. Ryan D’Souza, and all the dedicated staff of both Harrisburg and Community General Hospitals. A celebration of George’s life will be held at Historic Acres of Hershey 3425 Old Hershey Road, Elizabethtown, PA at 1-4 p.m. on November 27th. The dress code is casual. In lieu of flowers, please send memorial contributions to Shriner’s Hospitals for Children (lovetotherescue.org). The family has entrusted Matinchek Funeral Home and Cremation Inc., Middletown, to handle the funeral arrangements. Please visit matinchekfuneralhome.com to send condolences online.