To share your memory on the wall of Helen Colston, sign in using one of the following options:

On Tuesday, January 5, 2021, Helen Jean Colston made her transition to her new life in Eternity. It was also her 92nd birthday. A beloved matriarch, Helen entered this earthly life as the baby of her siblings.

On Tuesday, January 5, 2021, Helen Jean Colston made her transition to her new life in Eternity. It was also her 92nd birthday. A beloved matriarch, Helen entered this earthly life as the baby of her siblings.

Born on January 5, 1929 in Middletown, PA, “Helen Jean,” as she was called by her mother, was the daughter of the late Fred Colston and Ezola Carter Colston. A part of the historic Great Migration in America, the Colston family had relocated from Siler City, NC to Middletown, PA in the 1920s.

Helen was formally educated in the Middletown public school system. After exploring various vocational opportunities, she became employed by Chloë Textile Industries from which she also retired. At Chloë, Helen became an inspector of fine textiles. Her keen eye and professionalism oversaw the approval of materials to be sent to sartorial manufacturers, including the high fashion houses of New York City.

Helen went where her spirit told her. She was born and raised in the First Zion Baptist Church of Middletown, PA and later fellowshipped at various houses of worship. Helen was also a member of the Middletown, PA Elks Lodge. In furtherance of her belief in service, she was a donor and supporter of the not-for-profit organizations Feed the Children and The International Fellowship of Christians and Jews for decades.

“Jeanie,” as many of her friends called her, was a very down-to-earth woman who walked with the Lord. She loved to dress, read her bible, take car rides with her daughter, and spend time with family and friends. The love she gave was seemingly more than her 5-foot stature could contain.

Helen exemplified style, grace, and commitment to her faith. Every day, at 12 noon, she entered into prayer – as did her sister, Virginia Payne, before her. At any time of the day, you may have encountered Helen at Hardee’s restaurant in Middletown, reading her bible, and drinking a cup of coffee.

“Taking one day at a time.”

To send flowers to the family or plant a tree in memory of Helen Jean Colston, please visit our Heartfelt Sympathies Store.

Receive notifications about information and event scheduling for Helen

We encourage you to share your most beloved memories of Helen here, so that the family and other loved ones can always see it. You can upload cherished photographs, or share your favorite stories, and can even comment on those shared by others.

Posted Jan 13, 2021 at 02:00pm
To my Colston Family
I am deeply saddened on the loss of my grandmother Ada E Fields sister. Aunt Jean will be missed.
I will miss her bible verses she always would share and the beautiful and funny stories she would share
whether it be about her sister (my beloved grandma) or my mom. Love you Aunt Jean, say hi to everyone.
#gonebutneverforgotten.
Comment Share
Share via:
DS

Posted Jan 12, 2021 at 07:39am
Mom, I love you and will miss you always. I send these flowers knowing your at peace. Rejoice, dance, sing and enjoy your family in a new light.

Flowers were purchased for the family of Helen Colston. Send Flowers 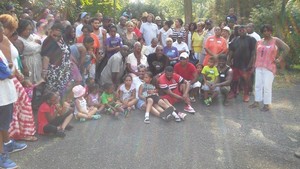