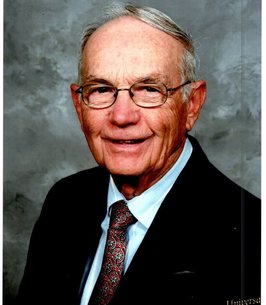 Robert E. Dupes, 98, of Middletown, PA passed away Saturday, April 2, 2022 at Oak Hill Village (formerly Frey Village). He was born on April 15, 1923, in Royalton, PA and was a son of the late Carl E. and Beulah A. (Wolf) Dupes.
He was a member of the Wesley United Methodist Church, 64 Ann Street, Middletown, PA, the Prince Edwin Masonic Lodge No. 486, Middletown, PA, the Scottish Rite Consistory of Harrisburg, the American Legion Post No. 594, the former Rescue Hose Company No. 3, and the National Association of Retired Federal Employees.
He was a Naval Air veteran of WWII, where he enlisted in October of 1942, and was honorably discharged in October of 1948. He had worked at the former Olmsted Air Force Base, and was retired from the Defense Contracts Administrative Services.
He was preceded in death by his wife of 60 years, Irene (Carter) Dupes, and four brothers Kenneth M. Dupes, Richard C. Dupes, (a WWII casualty), Earl R. Dupes, and James M. Dupes.
Surviving are two daughters, Debra Wilson, of Shermans Dale, PA, and Karlyn, wife of Dr. Ronald Hatcher of Lake Ridge, VA, four grandchildren, Jason and Justin Wilson, Lara Jaramillo, and Rachel Latham, seven great grandchildren and one great-great granddaughter.
The family would like to thank the staff at Oak Hill Village and Hospice of Central PA for the wonderful and compassionate care he received. In lieu of flowers, memorial contributions can be made in Robert’s name to Oak Hill Village, 1020 N. Union St., Middletown, PA or Hospice of Central Pennsylvania, 1320 Linglestown Rd., Harrisburg, PA 17110.
A memorial service will be held on Tuesday, April 12, 2022 at noon at Matinchek Funeral Home and Cremation Services, Inc., 260 E. Main St., Middletown, PA 17057 with Chaplain Wayne Muthler officiating. A visitation will be held from 11 AM until the time of the service. Burial with military honors will follow services in Middletown Cemetery. Memories and condolences may be shared at www.matinchekfuneralhome.com.