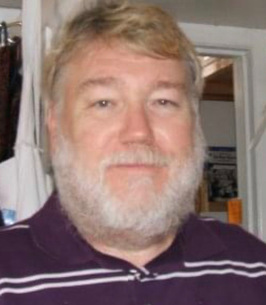 The end of his world descended upon Rob Spencer Vastine, III, 70, of Middletown, PA on February 15, 2022 after a short illness. He was born August 29, 1951 in Harrisburg, PA to the late Robert Spencer, Jr. and Agnes P. (Doyle) Vastine.
Rob proudly served in the United States Navy as PC2, from 1973 through 1977 onboard the USS Kinkaid, receiving the National Defense Service Medal and Good Conduct Medal (First Award). He was also stationed in Bermuda for a year, where he ran the post office.
Rob is a 1969 graduate from Middletown Area High School
and a 1979 graduate from Penn State University-Harrisburg, receiving a Bachelor of Sciences degree in Accounting. He applied his education by becoming an Accounting Manager or Controller from 1980 through 2000 at various companies including: Americomm Direct Marketing, Inc., Blue Jeans Accounting and Tax Service, Aspen Airways Inc., and Rocky Mountain Airways, Inc., in Denver, CO. During this time he also worked at APEX Health Care Network, LLC., where, along with the owner, opened the first multiple primary health care office in the Denver area. He was also an Accounting Manager at Stewart Equipment Co., Conshohocken, PA, and a Staff Accountant at Peat Marwick and Co., Harrisburg, PA.
After working a side-job selling Christmas trees in Denver for several seasons he was asked to move to Oregon to manage a newly purchased business. It was a 25 year old store who would only sell to someone who continued their vision, which he did. And then some. Rob spent 15 years until 2015 as General Manager for Sleighbells of Sherwood, a year round Christmas tree farm and two story barn gift shop near Portland, OR.
While in Sherwood, he hosted a minimum of three international exchange students from Asia, for what would have been the equivalent of their Senior year in high school. His young guests considered him a surrogate father, much to his delight.
Robs passion for classical music from a young age led him to play the piano and organ. He spent his spare time hosting many musical events while at Sleighbells, where he made many friends for life,
Rob retired to his hometown in 2016 where he volunteered for the Middletown Public Library and took on the responsibility of accounting activities related to their book sales, in addition to completely reorganizing how the books were presented.
He was an active volunteer in anything related to theater organs. Rob was involved in numerous theater programs including the Susquehanna Valley Theater Organ Society, the National Theater Organ Society, and the Columbia River Theater Organ Society.
Rob had a wide variety of additional interests including supporting the LGBTQ+ community, traveling, board games, gardening, trivia, crosswords, stamp and post card collecting, and was a purveyor of beautiful items from around the world. One of his favorite places in the world was Lake Powell, UT, where he vacationed repeatedly.
He is survived by a brother Donald M. Vastine and wife Judith; a sister, Janet L. Kirchner and husband John-Paul; 7 nieces and nephews; and 10 great-nieces and nephews. In addition to his parents he is predeceased by siblings, Patricia, Richard, and Timothy Vastine.
A graveside service will be held at the convenience of the family. A celebration of his life will be held on Saturday, February 19, 2022 at 1:00PM at the Middletown American Legion, 137 High St. Middletown PA 17057.
Arrangements have been entrusted to Matinchek Funeral Home and Cremation Services, Inc., 260 E. Main St., Middletown, PA 17057.
Rob was a strong advocate for reducing the carbon footprint and felt when a tree is cut, five should be planted. In lieu of flowers, please plant a tree in Rob’s memory. You may do this on your own or through our website under the “send flowers” tab.