To share your memory on the wall of Kenneth McGarvey, sign in using one of the following options:

He is survived by two sons, Kenneth, and Douglas and his wife Wendy; three grandchildren, Douglas, Dustin and Hannah; and two great-grandchildren, Lucy and Mabel. He is also survived by his companion Peg Bryant.

Ken was a graduate of M.S. Hershey Senior High School and served in the United States Navy and Middletown Police. He was a printer by trade and retired from the Patriot News. He was a member of Middletown First Church of God since 1953.

A memorial service will be held on Monday, June 14, 2021 at 11 AM at Middletown First Church of God, 245 W. High St., Middletown, PA 17057 with Pastor Kimberly B. Shifler officiating. Visitation will be from 10 AM until time of the service. Burial will be private at the convenience of the family in Woodlawn Memorial Gardens, Harrisburg, PA. Arrangements have been entrusted to Matinchek Funeral Home and Cremation Services, Inc., 260 E. Main St., Middletown. Memories and condolences may be shared at www.Matinchekfuneralhome.com.

Flowers and cards may be sent to Middletown First Church of God.
Read Less

To send flowers to the family or plant a tree in memory of Kenneth Allen McGarvey Sr., please visit our Heartfelt Sympathies Store.

Receive notifications about information and event scheduling for Kenneth

We encourage you to share your most beloved memories of Kenneth here, so that the family and other loved ones can always see it. You can upload cherished photographs, or share your favorite stories, and can even comment on those shared by others.

The McDonald family, The Lenker Family, and other have sent flowers to the family of Kenneth Allen McGarvey Sr.
Show you care by sending flowers

Posted Jun 04, 2021 at 07:05am
To Peg and the McGarvey family. In loving memory of our amazing neighbor and friend.

The McDonald family purchased flowers for the family of Kenneth McGarvey. Send Flowers

Posted Jun 03, 2021 at 07:19am
Please accept our most heartfelt sympathies for your loss... Our thoughts are with you and your family during this difficult time. 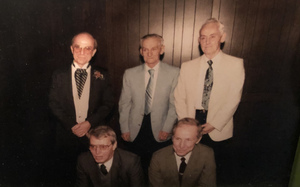